A nicely browned charcoal grilled turkey is more than Turkey Day grub. For all the benefits turkey brings to the table, the big bird ought to be grilled and enjoyed several times a year.

Turkeys have a lot going for them. They are inexpensive, great tasting, take to a variety of different seasonings and flavors, and don't take a long time to cook, especially when cut up into sections before grilling. 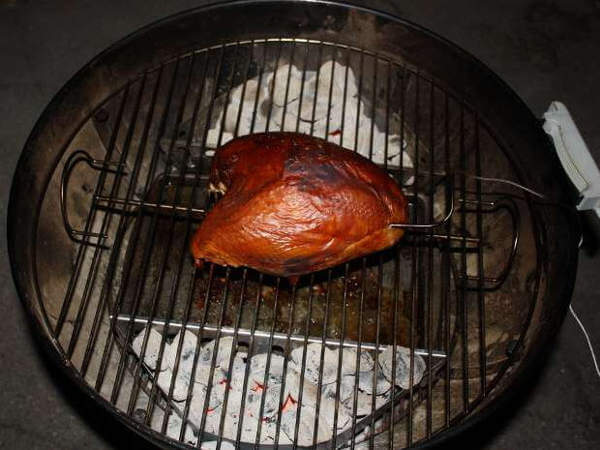 In the weeks before Thanksgiving, turkeys are usually sold at a discounted price, used as a loss leader by grocery stores to bring in the customers.

And after grabbing that cheap turkey, they fill their carts with all the more expensive fixings that round out the feast.

That's the time I'll buy 6 or 8 of them, enough to fill the freezer. Frozen whole turkeys keep well up to a year, and at 38 cents a pound (what I paid last November), they are an incredible bargain. 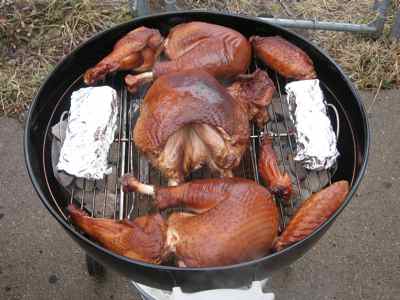 Turkeys are versatile, too. They can be seasoned with just salt and pepper, or spicy hot with Cajun seasoning, or smoked, marinated, injected… a freezer full of turkeys can provide a unique meal every month of the year.

A whole, roasted turkey looks great on the platter, but it has its drawbacks. The breast meat usually gets done before the thighs and legs, so often, the white meat ends up dry.

But by cutting it into sections, this grill smoked turkey takes less time, and cooks more evenly since the individual parts can be removed when they're done.

First, set up the grill for indirect cooking. Divide the charcoal briquettes into two piles, one on each side. In my 22-1/2 inch Weber kettle, there's just enough room to grill a cut up 20 pound turkey.

In a smaller grill, you'll need to use just one pile of briquettes, moving the turkey parts around every so often so they cook evenly.

Position the lid vent opposite the charcoal when using one pile of coals, or to the center, on one end, when using two charcoal piles. 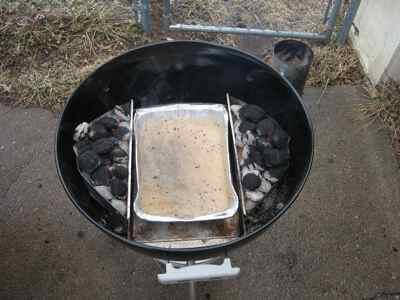 Put in a drip pan half-filled with water (with or without seasonings mixed in). It'll help keep the turkey moist, and catch the dripping juices.

Cut The Turkey Into Sections for Quicker, More Even Cooking On The Grill

To ensure that each part of the turkey reaches the correct final internal temperature, I cut up the bird into sections. Each piece is placed on the grate, positioned so it's not directly over the charcoal.

If there's room, keep a little space between the turkey parts. If not, just do your best to make them fit, without being directly over the coals. 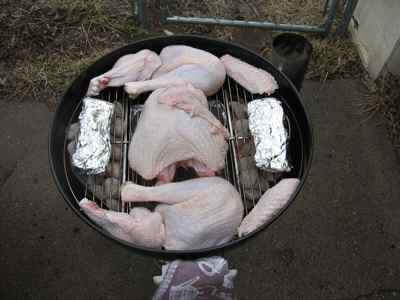 Place a foil packet of smoker wood chips directly over each pile of charcoal. I used a total of four wood chip foil packs for this 20 pound turkey, and it had just the right level of smoky flavor. Place the lid on the grill and forget about it for an hour.

After an hour and 10 minutes, I checked the grilling turkey and it was nicely browned, but still not up to done temp. I turned the leg quarters and wing pieces over, and rotated the breast 180 degrees.

After adding two new foil packs of wood chips, I put the lid back on and let it cook, monitoring the internal breast temperature with my remote thermometer.

A Consumer Guide to Safely Cooking a Turkey

The Charcoal Grilled Turkey Breast is Done! Let it Rest a While... 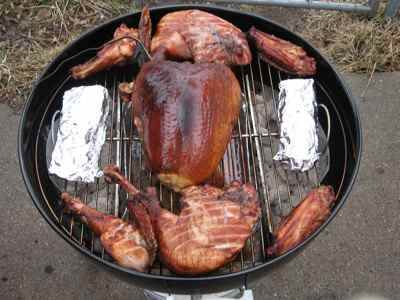 After another hour and 20 minutes (2-1/2 hours total), the breast had reached 160 degrees. I pulled it out of the grill and wrapped it in a couple of layers of aluminum foil.

After wrapping it in a heavy towel it was allowed to rest for a short time. There was enough residual heat to bring its final temp up to 165 degrees. 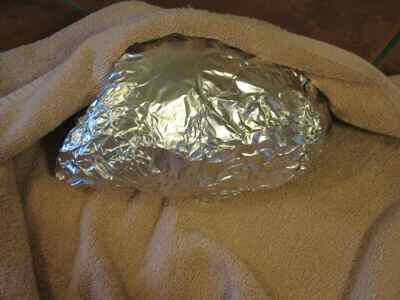 I re-positioned the turkey leg quarters and wing sections to the center of the grill, and continued cooking them.

I prefer the dark meat very well done, so I continued grilling until the thighs reached 180 degrees. 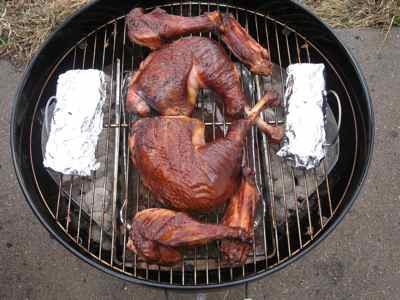 At that point the meat is slightly dehydrated, but still fall apart tender. Again, that's my personal preference. 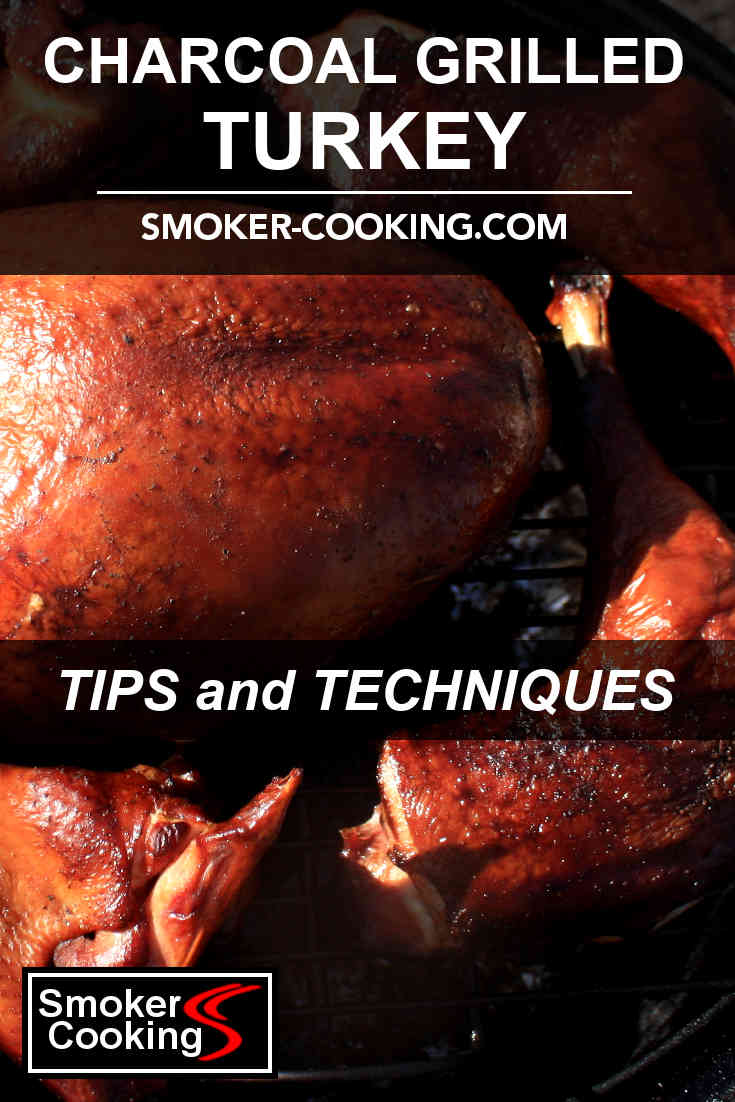 If you prefer the dark meat juicier it can be removed when it reaches 170, but at that point I find it to still be a little chewy. When the legs, thighs and wings are done, wrap in foil to rest before serving.