My son has started to raise chickens. Not knowing much, these chickens are Rhode Island Reds and should be butchered at 16 weeks. Well, that didn't happen. Now it's about 18 weeks. He butchered three and I baked them. They were as tough as boot soles. For real!

Can you help me figure out what to do? We have 23 of these buzzards to eat! 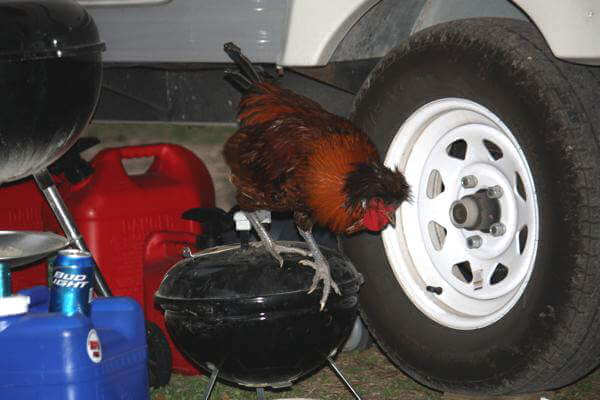 tough as a buzzard, page 2
by: Anonymous

I forgot to mention the other chickens we harvested the first time, we thawed them in the fridge for DAYS, our thought being that they would get their resting period after the freeze. Like I said, I brined them, so I don't know if that helped.

Also, our breed is the 'Freedom Rangers', which don't lay around like the Cornish Cross. They go out with the layers and forage a bit. Our smallest dressed out bird was 5#. Most of them averaged 6-6 1/2#. Biggest was 7#. But I did read that the Rhode Island Reds are a good multipurpose bird, and we may try those at some point.

tough as a buzzard...
by: Karen

We had the same problem with our first homegrown/home harvested chickens a couple months ago. Came home and read up on it. We had failed to keep them in the fridge for a couple days before freezing them.

Now we always refrigerate them 2-4 days before freezing. And since it was such a sad experience (because we spent the money on the organic feed), I even go ahead and brine them for several hours before cooking.

Of course you can add any ingredients you want to that, but just the plain thing tenderizes the meat. All meat is yummy and tender now! I will roast one soon without brining, just to see if the problem was in the lack of days in the fridge.

Tough chicken is tastier when fully cooked. Best bet is to pressure cook the chicken for 20-25 minutes. After pressuring, cook the chicken as you would normally cook a young chicken (found in the grocery store).

Tough Chicken Made Tender
by: Anonymous

Although my first thought was to just throw the tough chicken out since I had cooked one before and it was awful, I gave it one more try. I soaked the chicken with 1 1/2 tsp. baking soda in the freezer bag filled with water for about 4 -6 hours.

I drained the water and rinsed the chicken and put it in a crock pot on a bed of celery. Cover the chicken with water and let cook on low for 12 hours. The chicken came out oh so tender and literally fell off the bone. Not at all like the first bird I tried to slow cook on the stove top that never did get tender.

I've cooked a lot of home raised chickens and wild game that is tough as nails -- I agree that braising is one of the best ways to cook it. Another suggestion I would make is to marinate the meat first.

Wine, sherry, or vinegar are good bases for marinade. To that, add a little oil and seasonings of your choice. Then let it sit for several hours or over night. Finally, after browning the meat, I cook it low and slow for up to 6 hours!

What I have done in the past, I soak the bird in a saltwater brine, for 24 hours in the fridge, to remove as much blood as possible. Then I will freeze the bird.

Freezing helps to damage the cell walls, causing a tenderizing effect. Rigor mortis is your main problem. Commercially raised birds, the reason they are so tender, is because-

a.) They never get exercise, as they are raised in horrendously overcrowded conditions, and

b.) Are treated with unnatural enzymes after slaughter to help break down the flesh.

My favorite thing to do is burn them on a wood fire grill. Talk about DELICIOUS!! Food of Kings. Beer in one hand chicken in the other!

Next time try these.....
by: Anonymous

You can also raise Dark Cornish birds for meat. Doesn't solve your "buzzard" problem, but I have raised the Cornish - rock crosses. They are definitely better than store bought. And the feed/meat ratio is phenomenal.

But you can't do any breeding to replenish your stock. You are stuck buying chicks because they cannot breed. I just butchered my Dark Cornish roosters at 7 months a few days ago and they taste like nothing I have ever had! Not tough at all, but not mushy meat like the Cornish crosses.

Nice firm incredibly delicious meat. They are broody so they will hatch out babies for you to start the cycle all over again. And they are very good foragers. But the males are pretty aggressive, so not great if your son is young.

What to do...
by: ChickenEater

You need to raise the proper chickens for meat. What you want are the Cornish/Rock hybrid meat chickens. They grow to a healthy five lbs (dressed out) at eight weeks, and are as tender as the chickens you buy at the supermarket.

These birds are specifically raised for meat, and have a phenomenal growth rate. They will taste far superior to the chicken at the grocery store, and be better for you. As for your other bird (the Rhode Island Reds), common practice for those is to use them in soups and stews. They are too tough to use for baking or grilling, or even smoking.

One favorite the old timers would make with them is the old fashioned chicken 'n' biscuits meal which involves cooking the chicken in a pot until the meat falls from the bones, making a gravy from the broth, and then serving over large home baked biscuits. It's quite good, give it a try!

If you are really ambitious, you can try canning your chicken in pint Ball jars, as it has to be pressure cooked. That process will make your tough birds as tender as any you've had. Good luck!

tough as nails
by: Anonymous

I tried to barbeque two birds (16 weeks ) that I had raised since hatching,they were very tough and the taste was somewhat different. My wife would not eat them.

So you don't recommend my neighbor eating my year old roosters then huh? LMBO - if 18 weeks is tough, he said he can boil them but wow!

One word: Boil
by: Stephanie

I've been raising chickens for several years and I raise them mainly for fun and eggs. The roosters, I harvest them mainly for feathers for fly tiers so the birds are far past the time to be made into a roasted bird. I made the mistake of trying to fry one once. Tough doesn't even begin to describe the consistency.

However, I felt it to be too much of a waste to throw the meat away so I have found the best way to fix the birds is to boil them slowly. First, I take the bird right after butchering and put it in the fridge for a day or two. (This helps to rid the bird of rigor mortis.) I then throw it in a crock pot, cover it completely with water and go to work.

When I come home, the meat is literally falling off the bone. Now I can make: chicken soup, chicken enchiladas, chicken salad, tortilla soup, King Ranch Chicken, gumbo, etc. and I can even can the chicken (because I usually harvest a lot at once--usually the beginning the fall so I'll have less birds to feed during the winter when they eat more).

The Blue Ball book will tell you how to do this with a pressure cooker. Hope this helps you!

Reds are a multi-purpose bird. Raise just meat chickens and feed them for 6-8 weeks. They are a lot more tender and have a lot more meat. Then smoke them at a low temp like 225. Enjoy, hope it helps...

Tough meats (or chicken) can be made more tender by cooking at a lower temperature for a long time. One way you could make those tough birds edible would be to braise them. This can be done either on the stove top or in the oven.

On the stove top, a heavy pan like a dutch oven is best. The sides and lid capture heat and radiate it all around the cooking chicken. A lighter baking dish or pan can be used in the oven, but even there, heavier is better.

Cut the old buzzards into the usual pieces. Season with salt and pepper and brown the chicken quickly on both sides in hot oil. Use your braising vessel to brown the chicken in. When done browning, drain off most of the oil, but leave any browned bits and pieces for flavor.

Place the pieces in the braising vessel with just enough broth (chicken or vegetable) to cover the pieces halfway. On the stove top, bring it slowly to a boil, then lower the temperature to a low simmer.

Continue cooking, covered, for a couple of hours, adding more broth as needed. If braising in the oven, bring it to a boil on the stove top first, then place it in a 300 degree oven. Again, check occasionally and add broth as needed.

Cooked long enough, the chicken will be fall apart tender. For more flavor, add sliced onions and your favorite herbs to the pot along with the chicken pieces.

You could also cook the chicken on the smoker or the grill. After the first hour of cooking wrap the bird in a double layer of heavy duty foil and continue applying heat until tender.