How Long Does it Take to Smoke a Boston Butt? 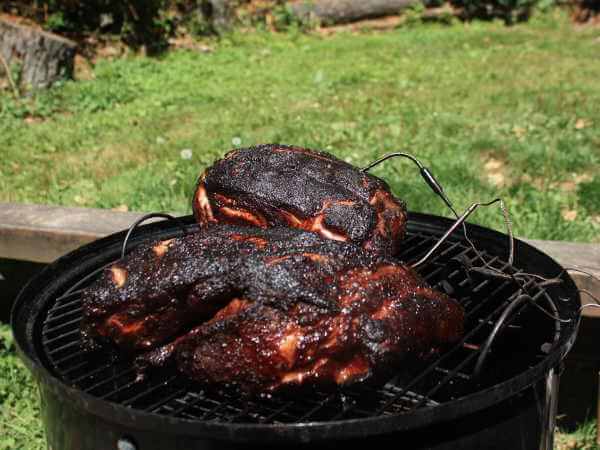 I bought a wireless temperature probe at Lowe's for about 20 bucks. Best money I ever spent. I don't have to lift my lid as often.

It signals me inside the house when my Boston butt reaches 195˚. I watch the temperature, but time seems to be at least 8 hours, no matter what the size of the butt is. 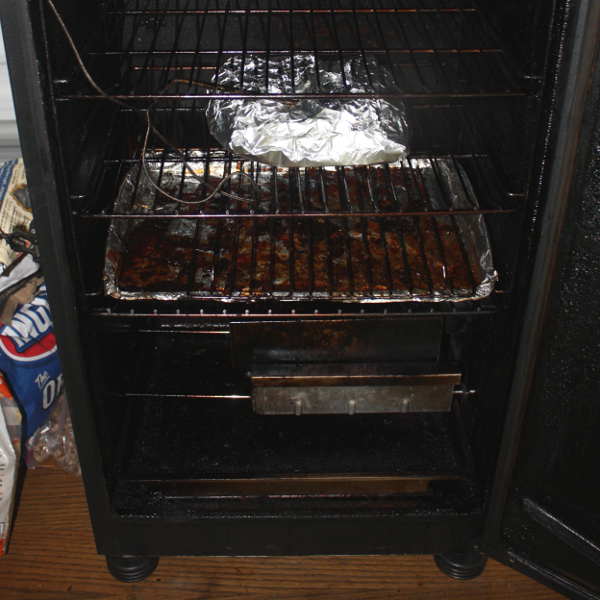 Without knowing what the internal temperature of your electric smoker is when it's set on medium, it's impossible to give you a good answer to your question.

Other factors to consider are the size, shape, and type of the meat being smoked. In your case, smoking a whole six pound Boston butt at 225°F would normally take around one and one-half hours per pound, more or less, to become tender enough to pull or shred (internal temperature of 190+°F), or up to 9 or more hours.

Now if you just want it cooked enough to slice and eat safely  (an internal temperature of 145°F), it could take only 4 to 6 hours. But when cooked to a lower temperature, a Boston butt can be a tough bite to swallow.

The shape of the meat makes a difference, too. If you were to take that same 6 pound butt roast and slice it into 1 inch thick steaks, it would take less time to become fall-apart tender.

But thinner cuts tend to dry out more if cooking to the shredding stage. However, if you were cooking the pork up to 145°F, you'd save a considerable amount of time.

About smoker temperature, when yours is set on "Medium", you really don't know what the temperature of the smoke chamber is. (on a vertical electric smoker, you'd consider the smoke chamber to be the level at which the meat is...not at the top of the lid, where some smoker thermometers are mounted)

To have a better idea of how long it will take you to smoke meats, you need to find out exactly how hot your smoker cooks at the different settings. One way to check would be to set an oven thermometer next to the smoking butt roast, but there is a better way.

To do this, you'll need to get a good dual probe smoker thermometer. One of the probes monitors the meat temperature, and the second probe clips to the grate, next to the meat and measures the temperature of the smoker. That way,  you know the exact cooking temperature while the butt is smoking. 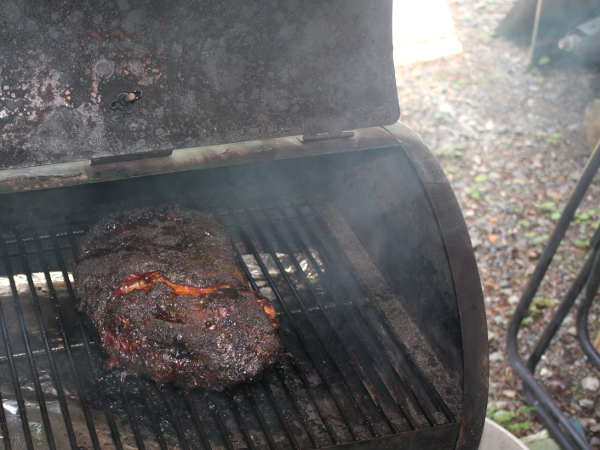 for what its worth
by: Dan

I'm smoking my first Boston butt this weekend. Can't wait. In the past, I've smoked 2 briskets at once, 9 racks of baby backs at once, and a brisket with 3 racks of ribs at once.

It seems to me that it cooks relatively equal. Meaning its more about the total weight of that 1 piece than the weight of total pieces, but I do hear pork butts are in a league of their own. Post your results.

How Long to Smoke a Boston Butt at 225 Degrees 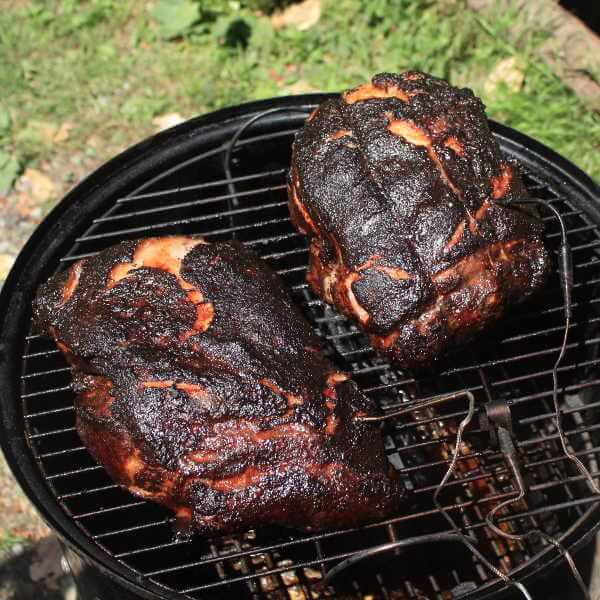 Pork butts can be notorious for taking a long time to smoke. The internal temperature often hits a plateau, then just sits there for what seems like hours before starting to rise again. It may be that the large pockets of internal fat are absorbing all the heat.

Depending on the type of smoker you're using, it may take more than 1-1/2 hours per pound to smoke a Boston butt. It will be absorbing a lot of heat, so the temperature rise will be slower unless your smoker can crank out the heat.

Just to make sure they get done in a reasonable amount of time, I'd try to run my smoker at 225 degrees, maybe a little higher if possible.

Many consider it cheating, but to speed up cooking, the butts can be wrapped in foil after they've gotten a good dose of smoke flavor, say after the first 4 or 5 hours of smoking.

They could even be transferred to your oven indoors, and finish them off at 300 degrees until the internal temperature reaches 195 degrees or so. Or until the meat is fall apart tender. 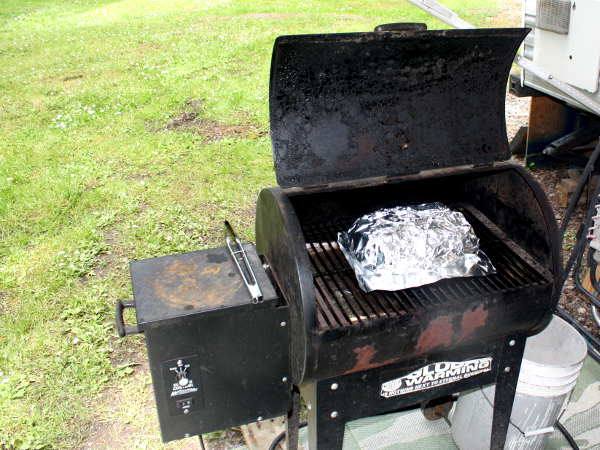 It can really speed things up if you wrap the pork in foil after it's smoked for a few hours. A pork butt will hit a point as it's smoking where its internal temperature stays at the same point without rising, and this usually happens when it reaches 150-160 degrees.

Wrap it in foil, or in uncoated butcher paper if you have it. When wrapping a pork butt in foil after it's smoked for at least 4 hours, it already has plenty of smoke flavor, so it won't be a problem.

The foil or butcher paper seals in all the moisture that would have been evaporating from the meat's surface. And that can get you past the temperature stall, or prevent it from happening all together.

After wrapping it, you don't need to use any more wood chips or chunks. All the pork butt needs is heat. Continue cooking it at 225˚ in the smoker, or you can increase the smoker temperature to speed up cooking even more.

Keep a remote smoker thermometer probe in the pork to monitor its temperature as it finishes cooking. With it wrapped, you should see a fairly steady rise in temperature.

When it reaches 190˚ F, it might be tender enough to pull apart, but if wait until it's hit 200 degrees, it'll be very tender, with no doubt.

After the Pork Butt is Done Cooking, Let it Rest For a While 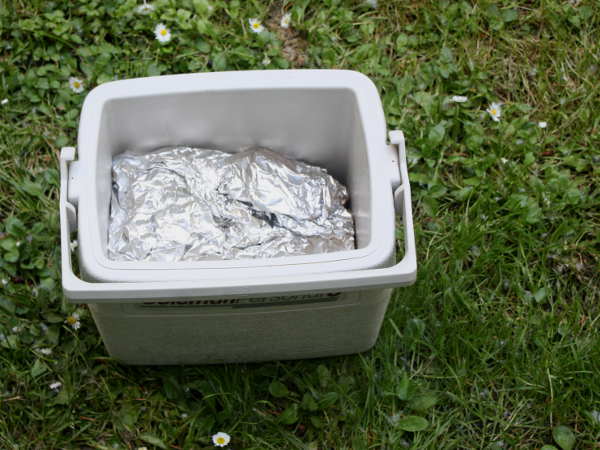 Finished Cooking and Resting In a Cooler

The resting period makes a huge difference in the quality of the smoked Boston butt. Some of the juices that were released into the foil will reabsorb back into the meat, making it more juicy and flavorful. Resting also allows the meat fibers to relax, which makes pulling the pork a lot easier.

A beer cooler is the perfect container to rest the smoked meat in. Being careful not to tear a hole in the foil, remove the cooked butt from the smoker the wrap it in a heavy towel, and place the whole thing into the cooler. Shut the lid and start waiting.

One hour of resting time is the minimum. Two hours is better, and four hours is best. After 4 hours the resting Boston butt will still be nice and warm and will shred easily.

Save any juice that remains in the foil, and pour it into the pork after it's shredded and mix it in. It will be quickly absorbed, and will add a lot more flavor and juiciness to your pulled pork. 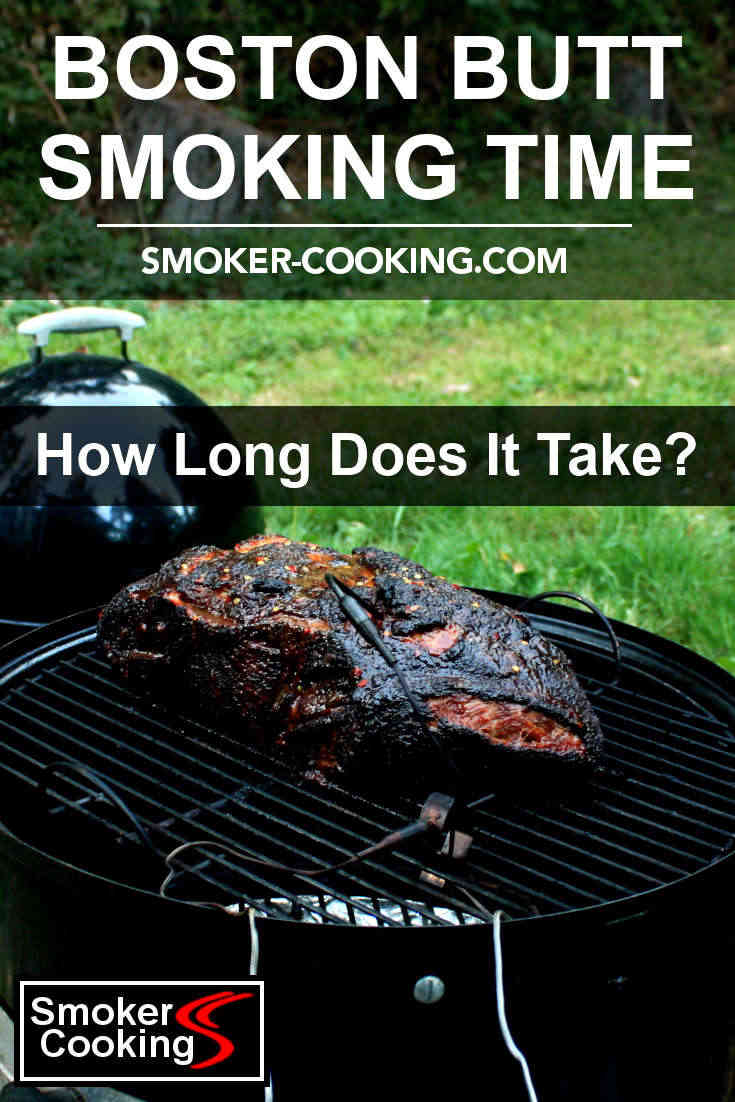