All About Pork Shoulders And How to Smoke 'em!

The humble pork shoulder can be one of the toughest cuts of meat from the pig, but since most hogs are under one year old when butchered, toughness usually isn't a problem. 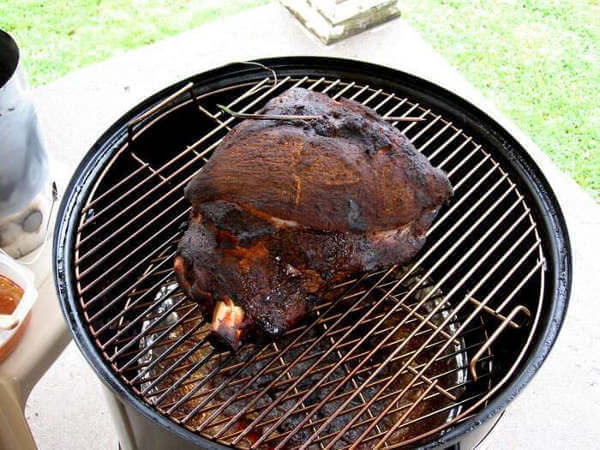 This Hunk of Pork Looks Done To Me!

"This North Carolina Style Pulled Pork Recipe is a winner!"

If you want one, it can usually be special ordered, but plan to pay a premium price.

The roast coming from the top end of the shoulder is known by many names. Pork butt and Boston butt are two…a third is pork blade roast, since the bone-in roast contains part of the shoulder blade.

This is the usual cut-of-choice for making smoked pulled pork. Bone-in is usually preferred for smoking, since the bone helps to transfer heat into the pork roast.

Below the butt is the picnic. This cut is most often cured, and becomes the picnic ham. It can usually be found alongside the butts in the meat case, and will also make good pulled pork. This cut has more fat and connective tissue than the butt.

When purchasing a pork butt or picnic for smoking, look for marbling and surface fat. The marbling and fat add flavor and juiciness.

Most pork these days is processed, or enhanced, with a brine solution containing sodium phosphate and salt, and can comprise up to eight percent of the total weight.

There are some benefits to processing the pork. Enhancing retards spoilage, which lengthens shelf life. It makes the pork a safer food product. It also helps the meat remain moist after cooking.

The enhancing brine is salty. Cut back on the called-for salt in your recipe when using enhanced pork.

Prepping The Pork Shoulder For The Smoker 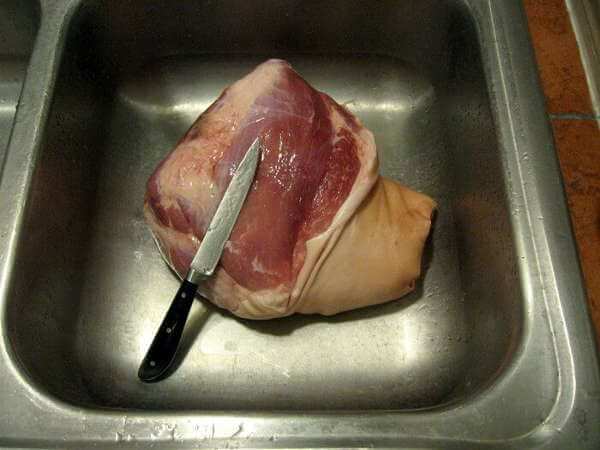 The pork should be rinsed, trimmed of excess fat, seasoned, and allowed to rest at least overnight in the fridge before hitting the smoker. A good dry rub or wet rub can really improve the flavor.

Refrain from using seasonings high in sugar…the long exposure to heat can cause the sugar to burn. Injecting flavor into the pork before the rest is an option, too. A simple marinade of fruit juice and spices works well.

A smoker temperature of 225 degrees to 240 degrees is ideal. I like to burn a small fire of oak, and add chunks of apple or hickory every hour or so. Using a combination of wood rounds out the smoke flavor nicely.

Start basting the pork butt or picnic after the first three or four hours of smoking. Brush it on every hour or so. If the basting liquid is free of solids, a spray bottle works well. I like to use Carolina vinegar barbecue sauce.

The tang of the vinegar and heat of the red peppers really gets into the meat. Apple juice or cider makes for a good baste as well.

How To Know When Your Smoke Pork Shoulder is Done

To be pull-apart tender, the internal temperature needs to reach at least 190 degrees Fahrenheit, and up to 205 is fine, especially if the cut is extra fatty. It can easily take twelve hours to reach this temperature, and often takes longer.

A remote thermometer is an invaluable tool to have when smoking meat. Every time you lift the lid to take a temperature reading, you add fifteen to thirty minutes to the smoking time.

A lot of heat escapes when the lid is opened. It's best to keep things covered up as much as possible.


In a hurry? Double-wrap the pork shoulder in aluminum foil after four or five hours of smoking. The internal temperature of wrapped meat rises quicker. The down side? The crusty bark is lost...it softens from the moisture within the foil.

When The Shoulder is Finished Smoking, Give It a Rest

When the pork has reached at least 190 degrees, remove it from the smoker and allow it to rest for at least an hour. Wrap it in foil, then in a couple of towels, and then put it in a cooler.

The meat will be great if you do this, but the bark will soften some. If you want to enjoy the chewy bark, the pork has to breathe a little. Rest the pork on the counter, covered with a foil tent and a clean towel.


There's Nothing More Fun Than Pulling Pork. Except Eating It! 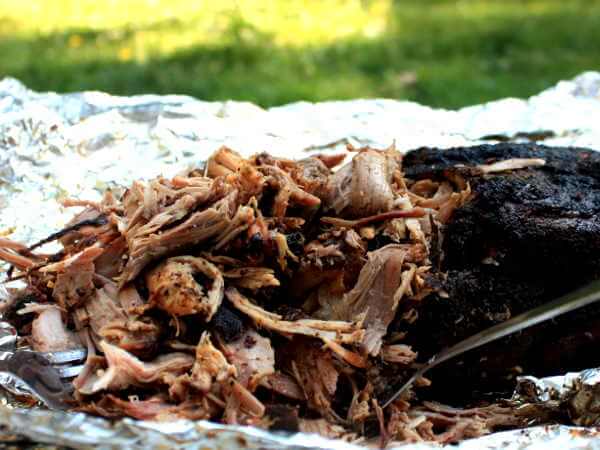 After resting, it's time to start pulling! Remove the bone…it should slip right out of there. There are a couple of ways to go from here.

You can use two forks and pull the meat apart, or you can really get into it and use your hands. I use the latter method, and wear disposable plastic gloves.

The meat can still be pretty hot, and the gloves offer some protection.

Douse the pulled pork shoulder with your favorite sauce, and serve it up with more sauce, buns, and coleslaw. The humble and inexpensive pork shoulder has been transformed into something to be proud of. But don't gloat too long, it's going fast!