Have you ever considered making smoked baked potatoes? There's a way to prevent them from drying out as they cook in the the smoker, where the temperature is lower than the ideal temp for baking potatoes.

Enjoy the following discussion that took place here a couple of years ago regarding smoked potatoes, and check out the second half of the page to see the tater smoking method I use. 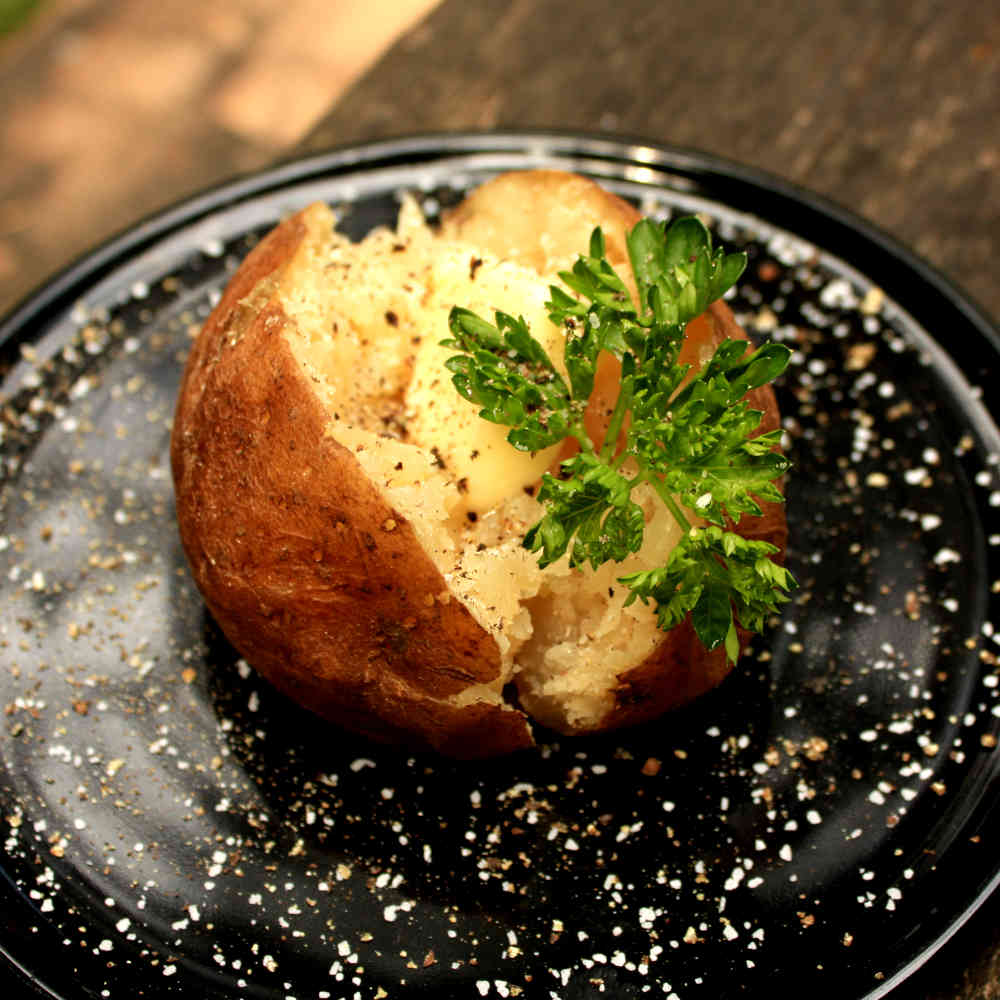 How do you make smoked baked potatoes? Someone told us they are excellent. We have a vertical water smoker.

Cooking potatoes in a microwave just doesn't leave a smoky favor, nor does putting them in a smoker for two hours.

I suspect any potato that is baked could be called delicious, but simply putting them in a smoker, especially if they are wrapped in foil doesn't really qualify for a "smoked baked potato".

I would like to see a real recipe for a baked potato that has a smoky flavor when split open and butter is slathered on... 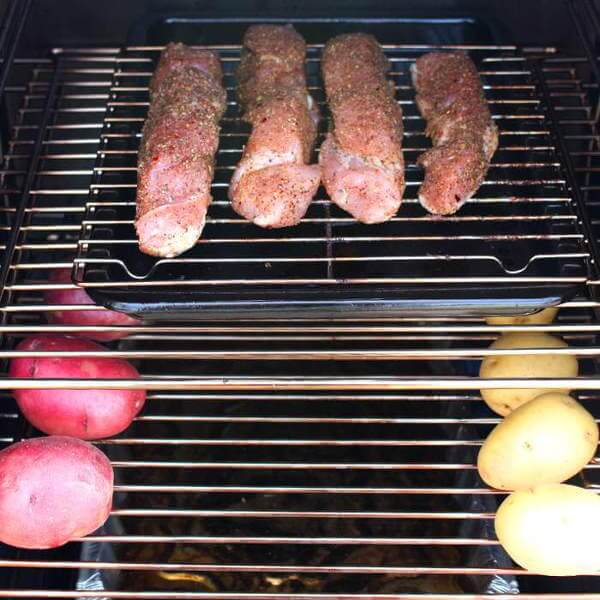 Smoking a Few Taters With Some Country Style Ribs

Potatoes prepared this way do not have a smoked flavor. Setting them in the sun all afternoon would give you the same results. These end up being plain old baked potatoes.

I smoked some potatoes as an experiment once and they dried out badly during the smoking, so the next try I cooked them in the microwave until just done (easy to puncture with fork or tooth pick). 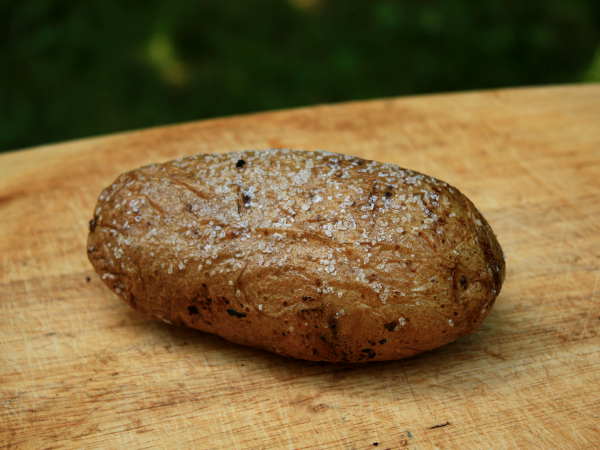 Microwaved, Rubbed With Oil, Sprinkled With Salt and Smoked. Delicious!

I put them in smoker along with whatever meat I am cooking for about 1 hour (up to 2 for more flavor) at about 225 deg. and they are absolutely delicious. Company raved about them and we love them.

I do some just about every time I smoke and they will keep very well in the fridge for a long time without degrading.

Not really smoked but...
by: Karl

When I do taters on my smoker I wouldn't really call them smoked because I keep them wrapped in foil the whole time, but here is how I do it.

I take a slice of onion about half an inch thick or so and put in a square of foil big enough to wrap around the potato, then put the potato on top of that, then add some olive oil and salt and pepper on top of everything.

I started doing them that way on the grill to keep the bottom of the potato from burning as bad, and found out the onion is really good to put on the potato after it caramelizes. I tried it one time on the smoker and it was even better. 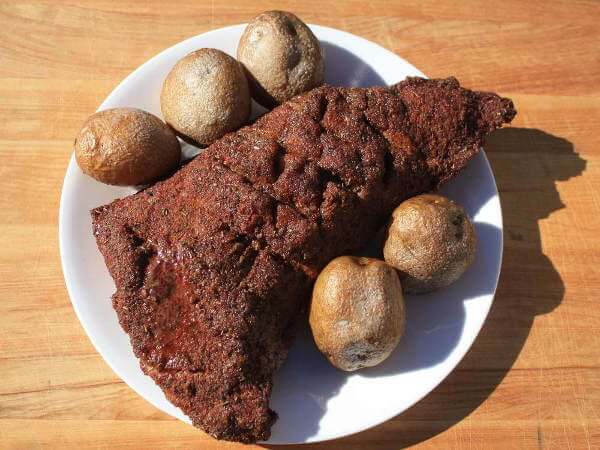 I put them on 2-3 hours before whatever I am smoking is done, usually closer to 2. They don't really get any smoky flavor, but they are very good and moist this way.

I just smoked several red potatoes and Yukon Gold potatoes in my Char Broil propane smoker, and they turned out beautifully!

They were perfectly done, and had a nice smoke flavor in the skin. It permeated a bit into the flesh of the potatoes too. I will smoke all my potatoes from now on.

I even fried some of the leftover smoked potatoes the next day for breakfast. Chopped them up and fried them in bacon grease. Talk about good eating! WOW! 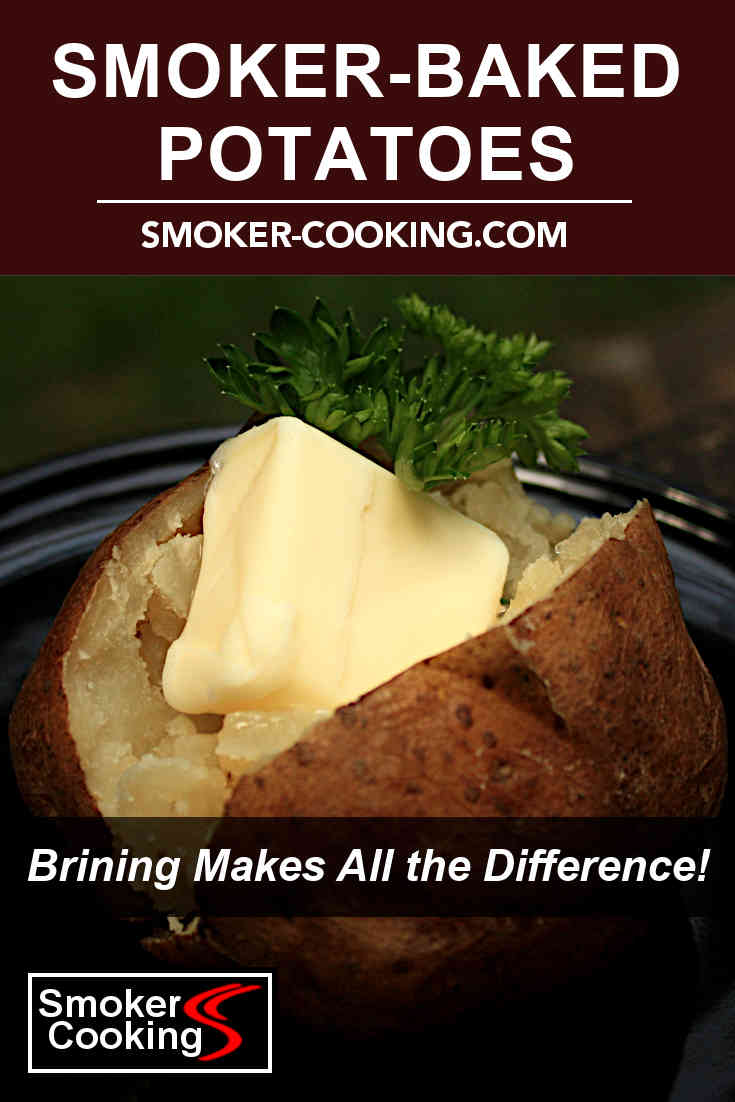 I love my potatoes whether they're red, white or gold. For making smoked potatoes that have the perfect texture for soaking up the butter, russet potatoes are ideal.

They have a higher starch content and less moisture than reds or gold potatoes. More starch makes the russets more tender and fluffy when cooked, perfect for absorbing sour cream and butter.

Reds and golds have more of a waxy texture, and in my opinion a more potatoe-y flavor. They're good eating, but not the best for mashing and soaking up liquids. 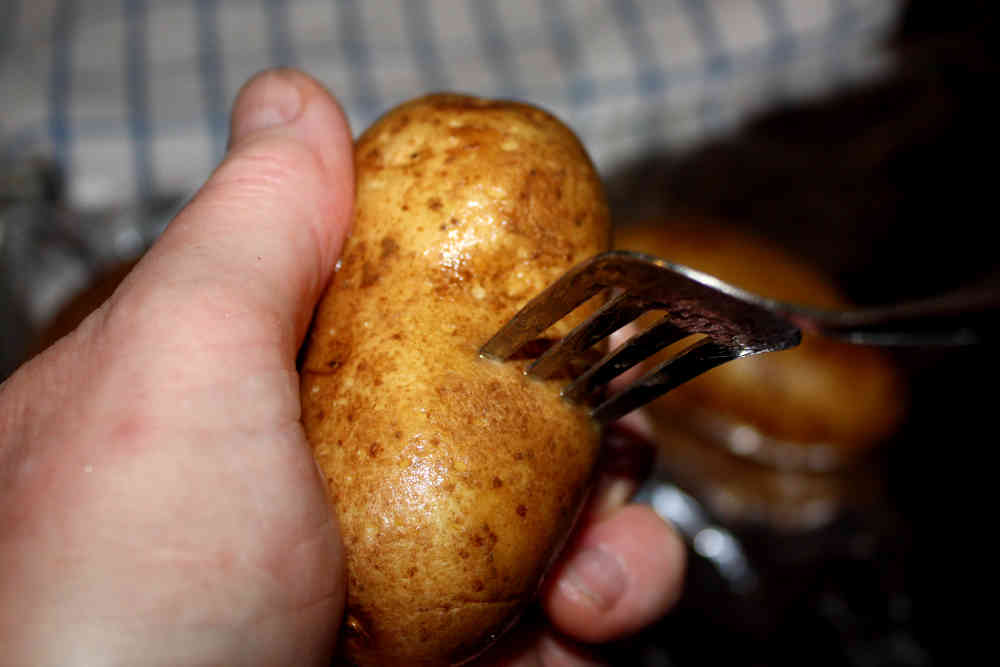 For the best results, choose potatoes that are similar in size and shape. They'll all cook in the same amount of time.

After scrubbing them, use a fork to prick a few holes through the skin, over the entire surface of the potatoes.

Brining Potatoes is Really a Thing!

It really help to brine the potatoes in salty water before they're cooked. A bit of the salt is absorbed into the flesh, and it gives the skin a nice saltiness. And I usually eat the skin last, after spreading it with butter and rolling it up! 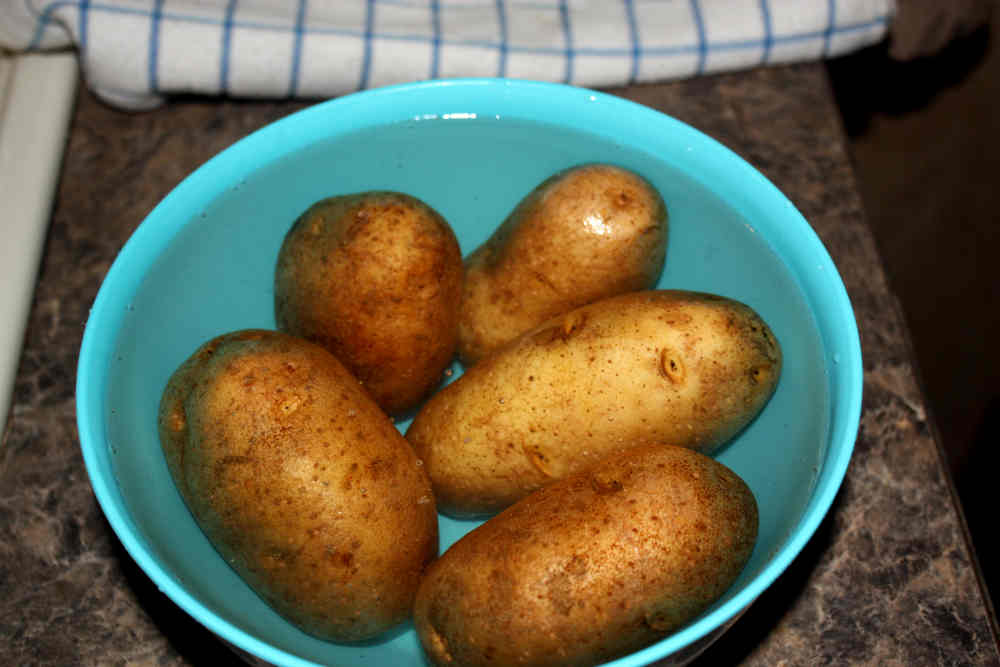 To make the brine, dissolve 2 tablespoons of salt into one quart of warm water. Make enough to completely submerge the potatoes.

Pre-cook Them In Foil or The Microwave

The brined potatoes are next wrapped in foil and partially-cooked in the smoker. This keeps the finished potatoes more moist, and makes the skin more tender. 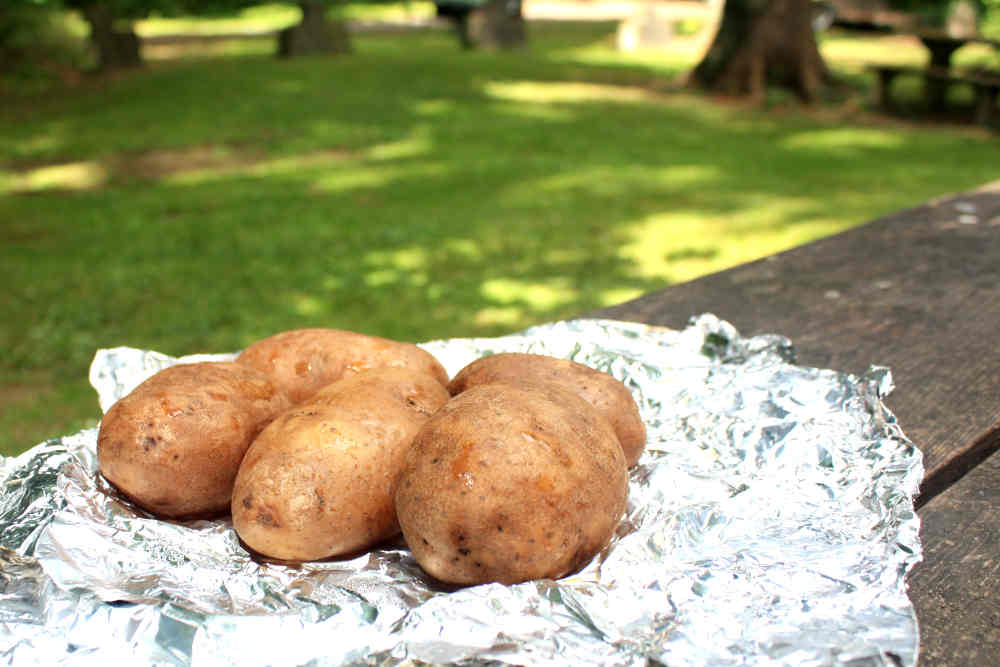 Optionally (and quicker!), put the taters in a microwave safe bowl, cover with plastic wrap, and cook them for 10 minutes or so on high.

You'll know they are done enough when the potatoes give a little when squeezed, but still feel a bit firm.

Give Those Potatoes Smoky Flavor

Now the almost-cooked taters are placed in the smoker to finish. Depending on the smoker temperature it can take another 30 minutes to an hour more. 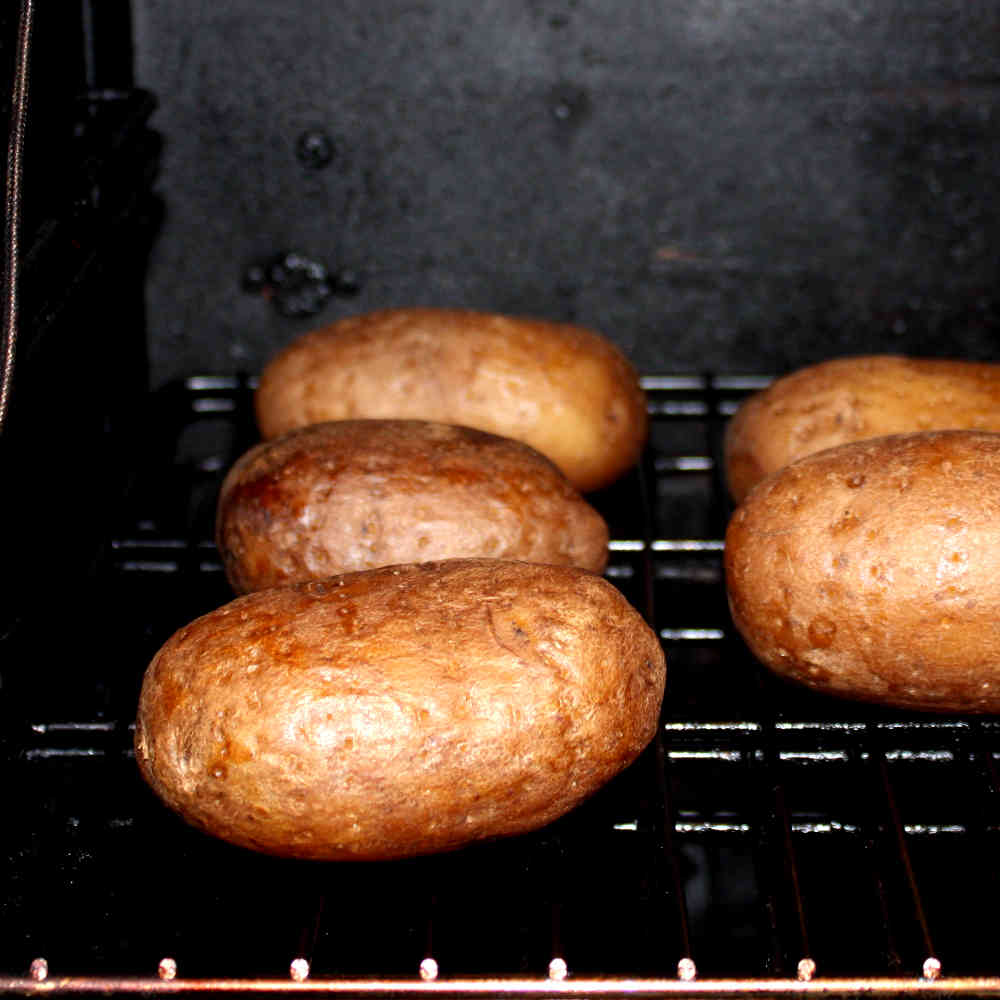 To determine if they're done cooking, give one of them a squeeze. If the flesh is tender and gives, it's ready to serve.

When I take them out of the smoker I usually give them a light brushing with melted butter. If you're a potato skin eater like me, you'll appreciate this final step. 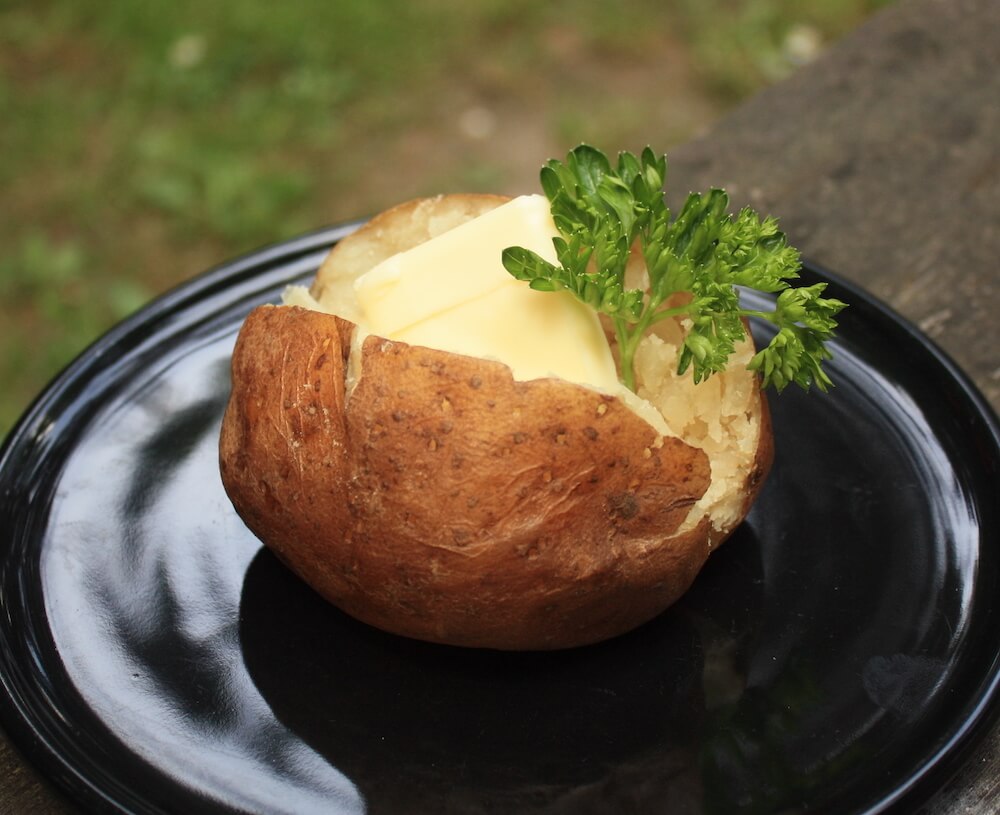 Now's not the time to use your finely tuned knife skills. Just grab a couple of hot pads and give the potatoes a squeeze, until the top pops open.

Squeezing breaks up the flesh, creating pathways for the butter to soak in throughout the potato. If you cut the potato open, all that butter will run right out onto the plate.