I am pretty new to smoking foods, but I get tough smoked chicken skin every time I smoke chickens or chicken wings. The skin comes out tough and rubbery.

It's nothing like the ones I have gotten at restaurants or barbecue cook-offs. What step am I missing or what am I doing wrong. 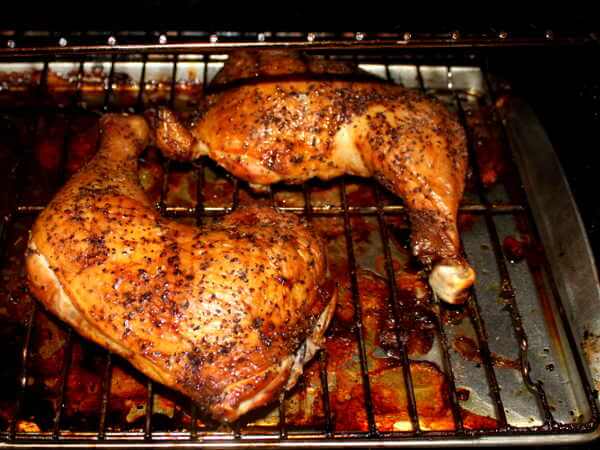 Smoking Chicken Quarters - Will The Skin Be Tough?

Why is My Smoked Chicken Skin Tough and Chewy?

I tried to smoke-roast some wings on the grill. Got tough skin. Here was my set up: Weber 3 burner gas grill. I brined wings for 2 hours, lightly seasoned and put them on the grill with only one burner lit. Wood chips in foil over the lit burner.

The temp never went over 300° for the smoking time (30 mins) Finished them over high heat for another 10-15. Wings were beautiful and brown with light grill marks but had rubbery skin.

BBQ vs. Smoked
by: Scott McKissack

Actually, the term BBQ refers to smoking using an offset firebox or water smoker. If you cook on a charcoal or gas grill over direct heat, that is called grilling.

A Different Theory
by: Smoke Ring

Brine, basting with fat and a higher temperature are the keys to preventing tough smoked chicken skin. During the normal oven roasting procedure for poultry the higher heat and basting with fat allows the skin to crisp.

At the higher temperature the juices are more fluent. This provides more moisture under the skin. The hot dry heat over the fatty skin fries once proper temperature has been reached and some fat has rendered. This allows the skin to crisp.

The juices under the skin stop the skin from drying out before it has a chance to crisp. The brine adds moisture and flavor to the poultry so it will still be a moist tender flavorful product. It also contains sugar that will brown and help the skin to get crisp.

Now! It is an issue of terminology. The poultry is not "barbecued" it is "smoke roasted." Roasting with the addition of smoke.

Because of the shorter cooking time the poultry will have less time in the smoke, but, it will still be very very tasty and beautiful with a edible skin. Temperature should be in the 300 - 325 degree F temperature range.

One thing I forgot to mention in my comment (directly below this one) is that I first fire up the smoker and get it going before placing the chicken briefly on the gas grill.

Then I grill the outside of the chicken and immediately transfer it to the smoker once the skin is done.

I agree exactly with Smoker Bill's advice, but there is one problem with some smokers: unless the outdoor temperature is 175 F, you can't get the smoker hot enough.

Not all smokers have this problem, but both of mine are water smokers and are designed to naturally settle in around 225.

Adding coals gives you a temporary boost, but then it settles right back down to 225. And, just like Smoker Bill says, then the fat doesn't render out of the skin and it turns out very rubbery and tough even when the meat is fully cooked.

So here's what I've done to counter that problem on a smoker that doesn't get hot enough: I fire up the gas grill and cook the chicken pieces (with olive oil and rub already applied) on medium heat for 2 minutes X 4 turns for 8 minutes total.

This is just enough to render the fat out of the skin, plus the fat doesn't escape as it would if you removed the skin. It gets absorbed into the meat like it's supposed to add flavor. The skin will tan a bit and maybe even blacken along the grill lines, but that's okay.

This will only contribute to the nice bronze look you want from the skin after smoking. Basically, you want to cook the skin until it loses that white, wet and rubbery look. But don't go too far- you don't want to begin cooking the inner layers of meat.

I've tried this process twice now and had great results both times. I was concerned that essentially "searing" the chicken would prevent the smoke from penetrating into the meat, but it didn't.

Again, I would only use this method if you have trouble maintaining a higher temperature, like 325, on your smoker. But if you can get there, go with Smoker Bill's suggestion.

And don't mess around with removing chicken skins, you're not a freaking surgeon. As Charles Barkley would say "Man, thas a terrible idea, knucklehead". Smoking meats is supposed to be easy and relaxing. Hope it works out for you!

What I like to do is to make a little incision that allows me to separate the skin from the meat while still leaving the skin on. Then I like to put my dry rub in between the skin and the meat. Next, I inject the bird with a marinade.

You can add a mopping sauce on part of the way through the smoking process - that would be great.

Finally, it is good to smoke a duck or two on a higher rack in the smoker (if you have a multi-rack smoker). The fat from the duck drips down on your chicken and damn it tastes good.

I assume you're doing a "beer butt" or "drunken" chicken? Coat the entire outside of the chicken with butter/olive oil, then sprinkle liberally with lemon pepper and seasoned salt.

Cook at 225 degrees for around 4 hours or until internal temperature of chicken is FDA approved. :) What the heck...here's the recipe I use, and it's always SUPER moist and the skin is just right.

Rinse chicken and pat dry. Place rosemary and lemon into chicken cavity. Rub butter or margarine under skin around neck.

Season chicken well with lemon pepper and seasoned salt. Stand chicken upright (neck end up) on 1/2 full beer can. Insert other half of lemon into neck end of chicken and stand on smoker.

Smoke at 225 for 3 1/2 to 4 hours. Carefully remove chicken from smoker and remove can from chicken cavity as beer can any remaining liquid will be hot. Carve and serve. 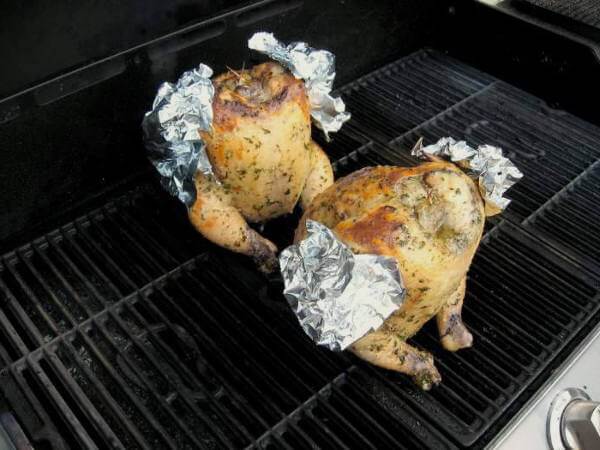 Indirect Heat Cooks Beer Can Chickens On The Grill

One of the pitfalls of smoking skin-on chicken at "normal" meat smoking temperatures is that the fat in the skin doesn't get hot enough to render out. The skin ends up being rubbery, pale, and extremely unappetizing.

There are two ways to solve this problem. One way is to remove the skin from any chicken you smoke. That'll prevent the tough skin problem, but causes another. Without that fatty layer of protection the chicken meat will dry out.

The better solution for smoking skin-on chicken, and for all skin-on birds, is to smoke at a higher temperature. Chicken and turkeys cook nicely when smoked in the temperature range of 275-300 degrees Fahrenheit.

True, it's more like roasting chicken (with smoke), but at that temperature, the fat renders from the skin and it become thin, tender, and crispy.

Another good thing about smoking poultry at higher temperatures is that the melting skin bastes the meat with awesome flavor! Try it next time you smoke a chicken. 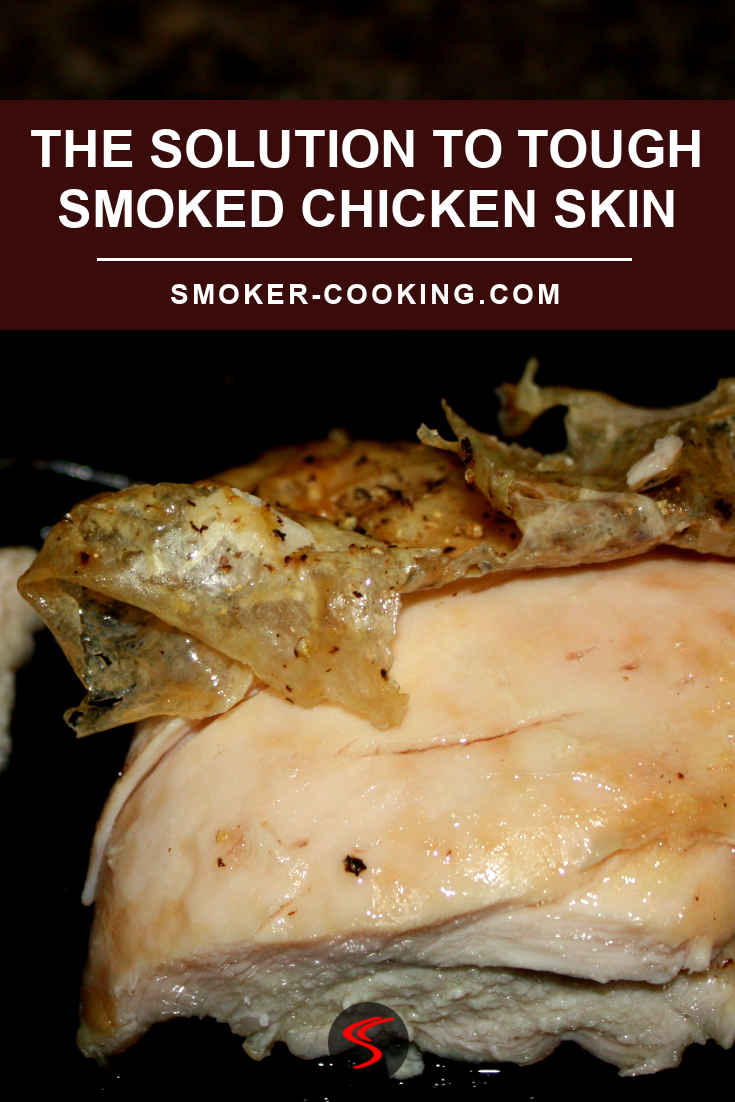 Tender Chicken Skin Is The Goal

Chicken is a favorite in the world of smoked foods, but there's a common problem - even when the chicken is cooked to the perfect done temperature, the skin is often tough and rubbery.

There are a few tricks that can solve this problem.The first is to make sure the skin is as dry as possible when it goes into the smoker. Pat it dry with a couple of paper towels to remove any moisture. It'll help a bit, but won't cure the problem.

Removing the skin before the chicken goes in the smoker is an option, but that removes the layer of protection that keeps the chicken from drying out as it smokes.

Discarding the skin after the chicken is cooked is a solution, but to me, that's just plain wasteful. With the skin goes a lot of flavor from the seasonings and the smoke.

So What Can Be Done To Tenderize Chicken Skin?

If your smoker can operate at 300°F, the high temperature will do a pretty good job of making the chicken skin more palatable.

Areas of the skin with thicker fat deposits may be a bit tough, but smoking at a 300 degrees, or even 325 degrees will improve the texture of the skin.

The chicken isn't in the smoker long enough to get a good dose of smokiness, but some smoke flavor will be evident. Smoke the chicken until it's reached its done temperature, and the skin will be much more tender than if smoked at a lower temperature. 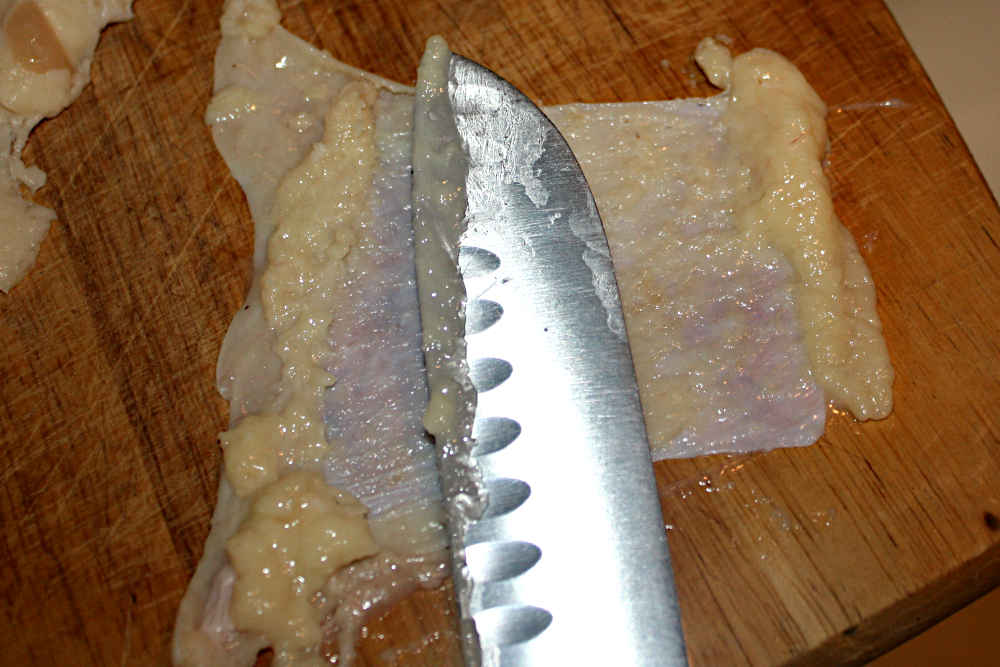 It's Kind Of Gross, But It Works!

The chicken skin can be peeled from the raw pieces and then, with a sharp eye, a steady hand and a sharp knife, the fat is scraped from the underside.The scraped skin is pressed back onto the chicken pieces. 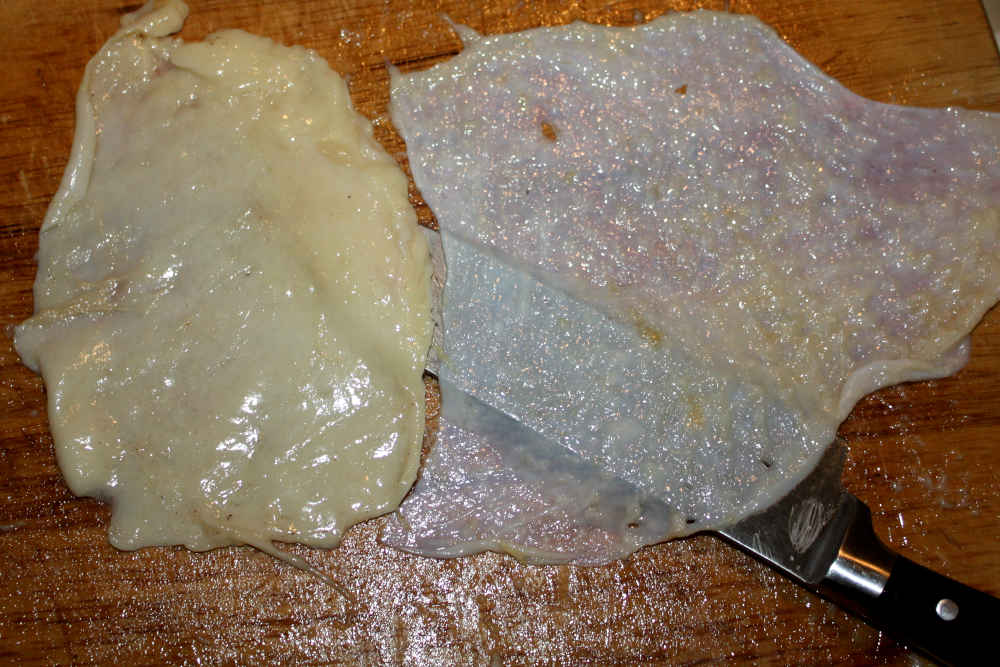 Removing the fat layer under the skin will allow the skin to dry more quickly as it smokes, and to crisp up a bit. 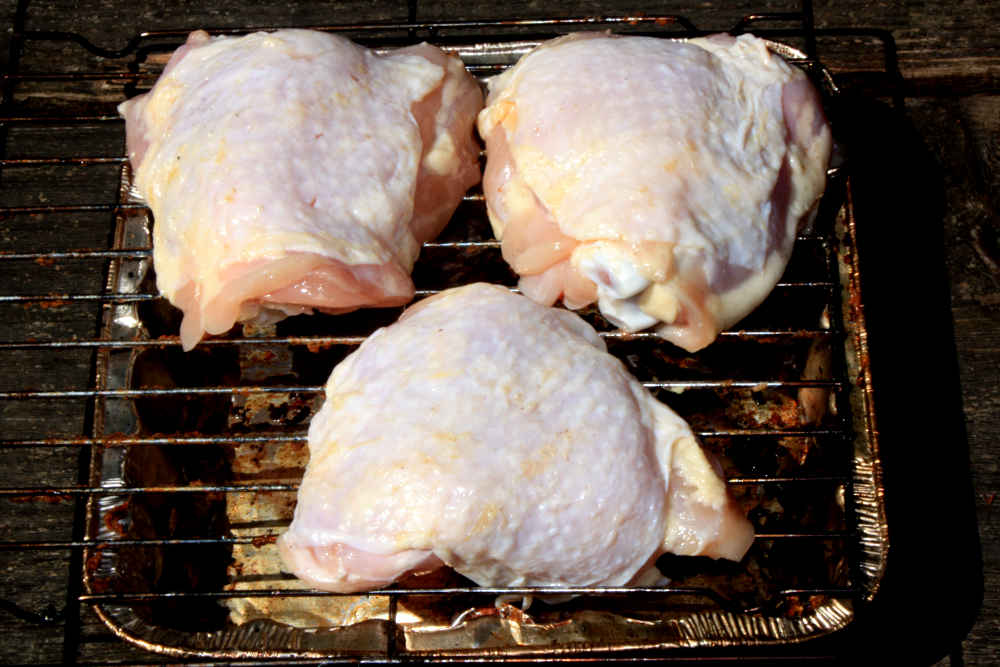 After Removing The Fat, The Skin Goes Back Onto the Chicken

It's a tedious chore, and it's easiest to do with thighs and breasts. I've used this method and the results were good. If your true desire is thin and crispy chicken skin, this will give you what you want. 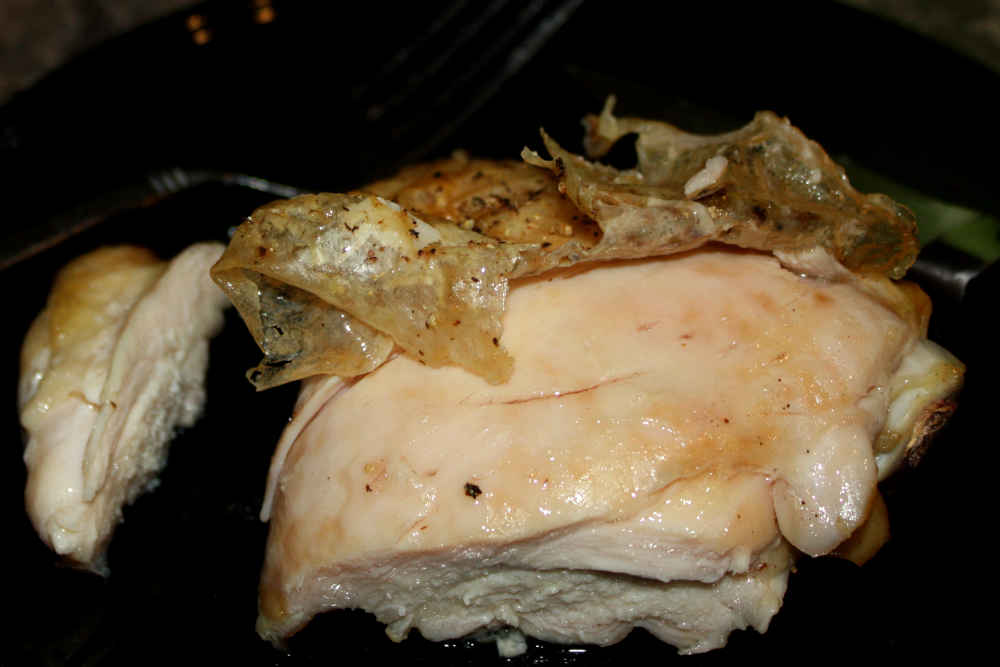 Crisp The Skin On The Grill After Smoking

This trick works well, but requires that you have both a smoker and a grill, and we all probably do. When the chicken is finished smoking, it's transferred to a grill heated to medium-high, over direct heat.

Watch it closely, turn it often enough so that it doesn't burn and the skin will crisp up nicely.

Stick to the USDA guidelines for preparing and cooking chicken.

I read that dusting the raw chicken skin lightly with baking powder, then letting it rest in the fridge overnight would make the skins more tender. 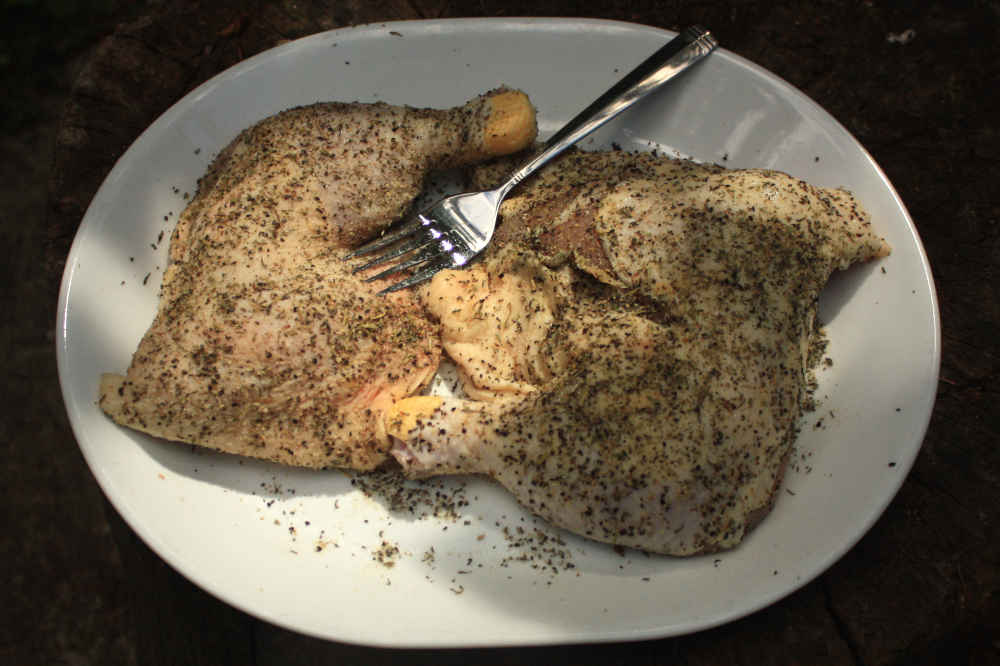 This Pair of Leg Quarters Was Sprinkled With Baking Powder, a Purported Skin Tenderizer.

And I tried this method once, but it didn't work out as well as I'd hoped. The skin was still rather chewy and the baking powder left the chicken with a slightly unpleasant flavor.

This is one that works well, and I've used it when smoking chicken drumsticks a few times.

Dry brine the chicken overnight in a disposable aluminum pan. When it's time to cook, season the drumsticks as you'd planned and add a half cup or so of water to the pan. 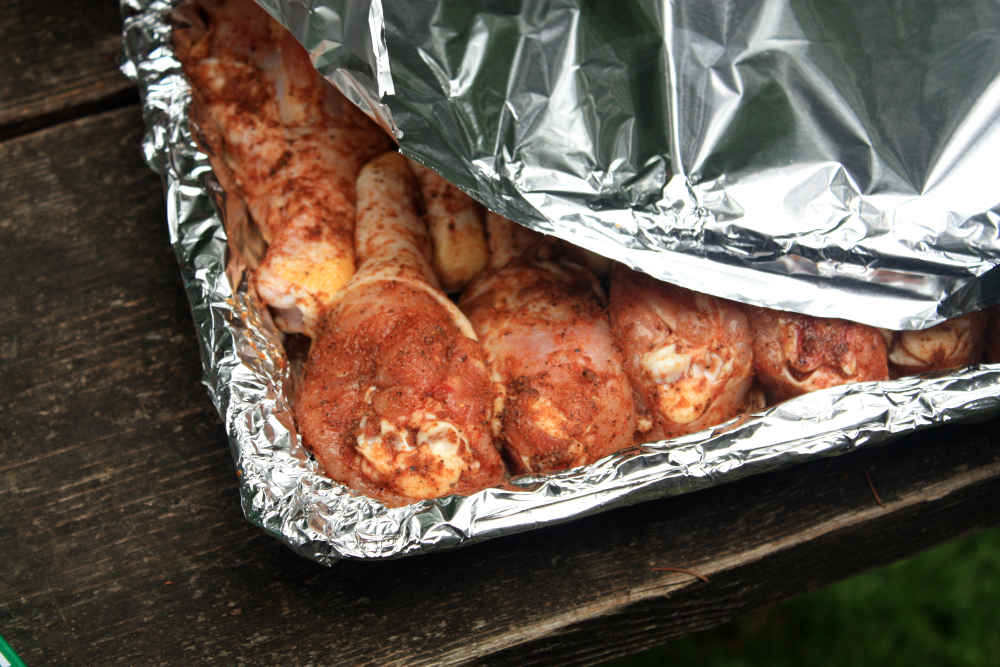 Seasoned Drumsticks Are Pre-Cooked to Tenderize The Skin

Crimp a section of aluminum foil tightly over the pan's top and put it in your smoker or grill, at around 250°F. In an hour or so, carefully lift one corner of the foil and check the skin for tenderness. 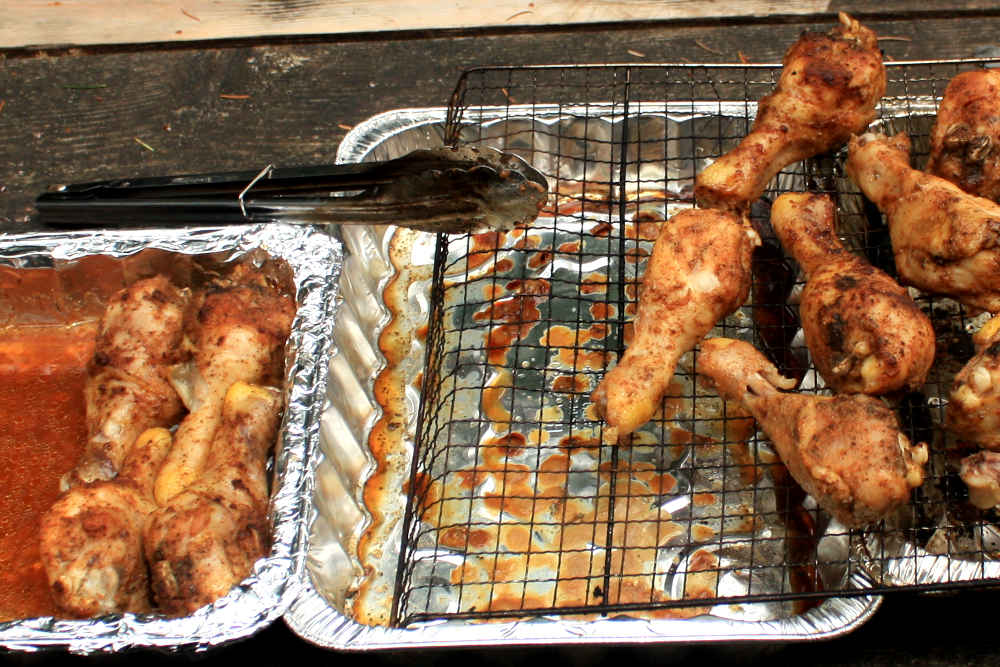 When the skin is tender, remove the drumsticks and place them in your smoker, finishing by smoking them at 225°F for another 30 minutes to give them smoke flavor and dry the skin a bit. 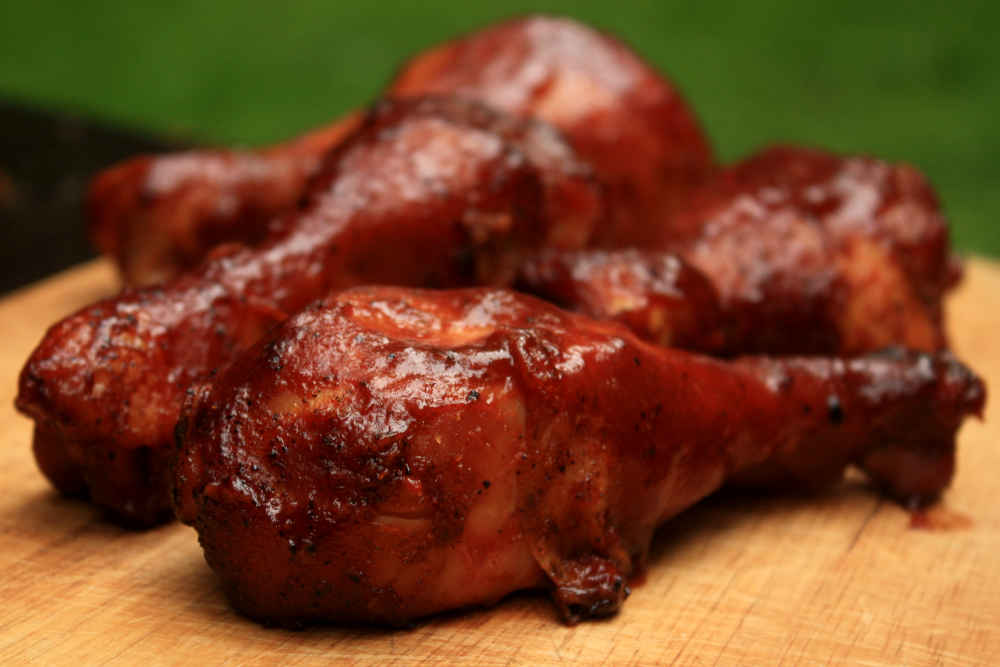 Succulent Drumsticks, Slick With Sauce and Tender of Skin

At this point I like to brush on some bbq sauce, then smoke them for another 15 to 20 minutes to thicken the glaze.