How To Smoke a Whole Chicken That's Packed With Flavor

If you're still smoking chickens like you smoke brisket and pork butts, low and slow, you are missing out! Find out how to smoke whole chicken that's done in almost half the time, and tastes twice as good! 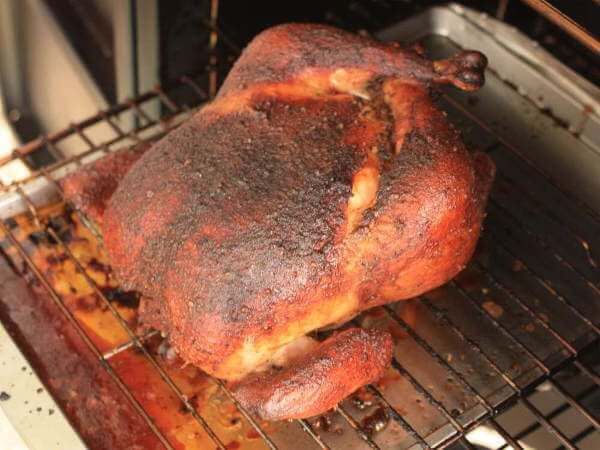 For years I'd been smoking whole chicken in smokers running at around 225 degrees Fahrenheit, just like I smoked about everything else. But a year or so ago I discovered that it's better to smoke poultry at a higher temperature.

After trying it myself, I wondered why I ever smoked chickens any other way! There are definite benefits to smoking chicken (and other poultry) at 275 degrees and higher, and no drawbacks.

The chickens cook quicker and the skin gets crispy and browned, which adds another layer of flavor to the birds. And even though the smoking time is shortened, the meat gets plenty of smoky flavor.

Poultry is put together differently than beef and pork, and doesn't require low temperatures and slow cooking to become juicy and tender. I mean, weren't those beer butt chickens you grilled last summer tender, juicy and full of flavor? They didn't suffer from cooking at 300+ degrees, did they?

How To Smoke Whole Chickens 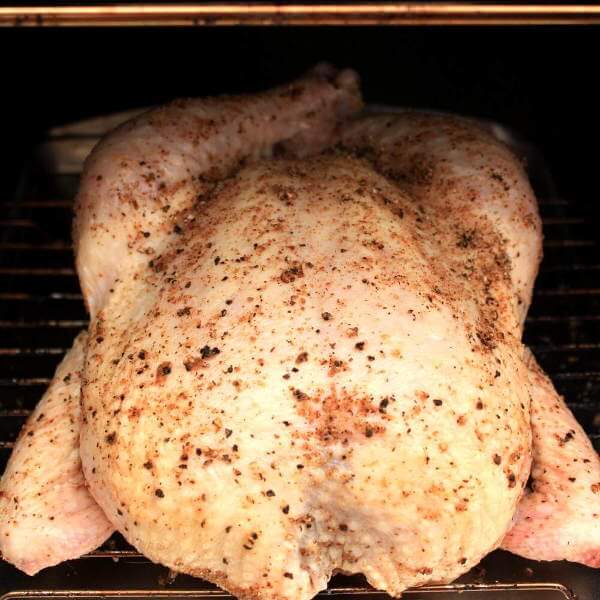 So, how do you go about smoking a whole chicken? There's really not that much to it. 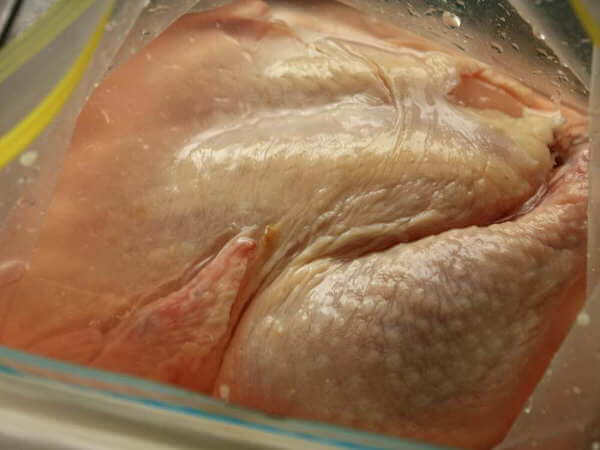 A one-gallon food storage bag or freezer bag is the perfect size for most chickens. And by using one, you don't have to make a lot of brine as you would if brining in a bowl or other hard container. Usually, one quart to one and one-half quarts of brine is enough when bag-brining a chicken.

With a little more time and effort you can make a more effective, more flavorful brine. All that's required is mixing some of the ingredients in water and bringing them to a simmer.

Seasoning The Chicken With Flavor

Let the chicken drain for a few minutes after removing from the brine. Use one of your favorite rubs to season the outside of the chicken and inside the body cavity.

I used a simple mix of cracked black pepper, onion powder and a little chili powder. No salt was added to the rub because brining took care of that. Coat the bird evenly, pressing it in to help hold it in place. 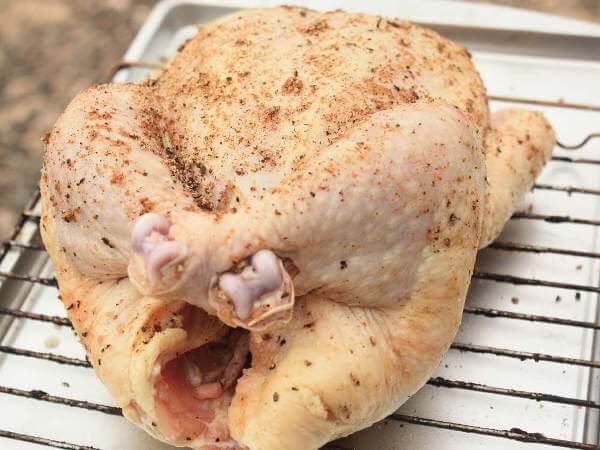 Trussing a Chicken Without Using String! 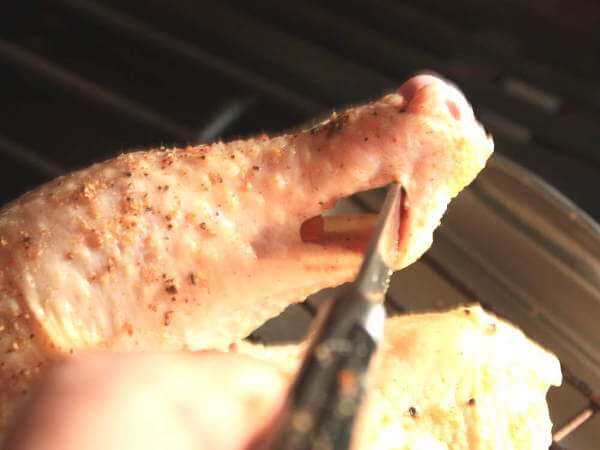 First, make a cut on the underside of one leg, between the bone and the tendon. Make the cut barely large enough to allow the end of the other leg to pass through. 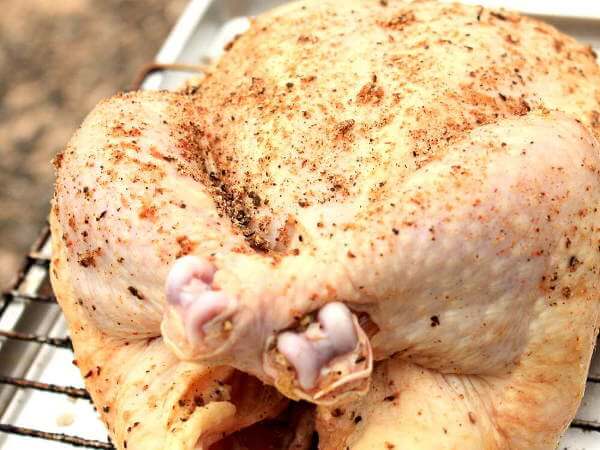 Insert the end of the other leg through the opening you just made. You want a snug fit here. If the cut you made was too large, try again and make a smaller opening in the the other leg. 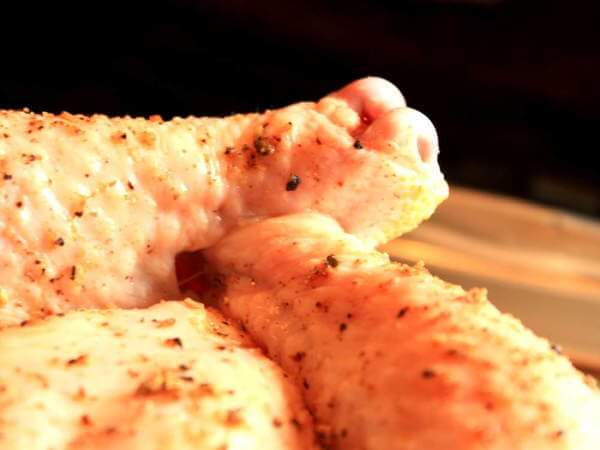 Now you have a nicely trussed chicken, which will help it cook more evenly in the smoker.

Basting a whole chicken adds flavor and helps keep the meat moist. I like to use something that has some oil or fat, a little sweetness, some spice and some acidity.

The basting liquid in the picture below is something I made up using a little chicken fat I saved from some thighs I cooked, a little BBQ sauce, a touch of vinegar and Worcestershire sauce, ground black pepper and onion powder. 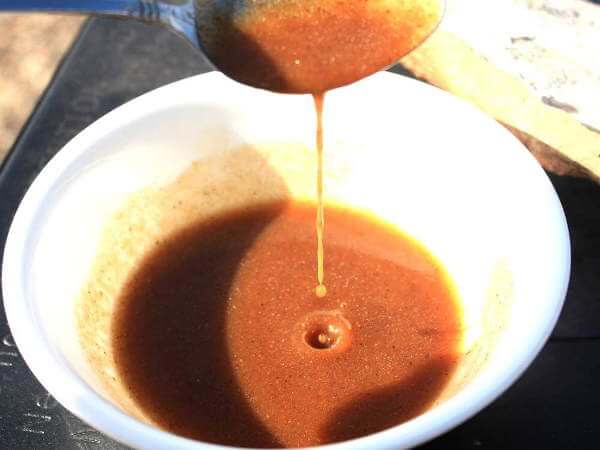 Baste the chicken  two or three times as it smokes. 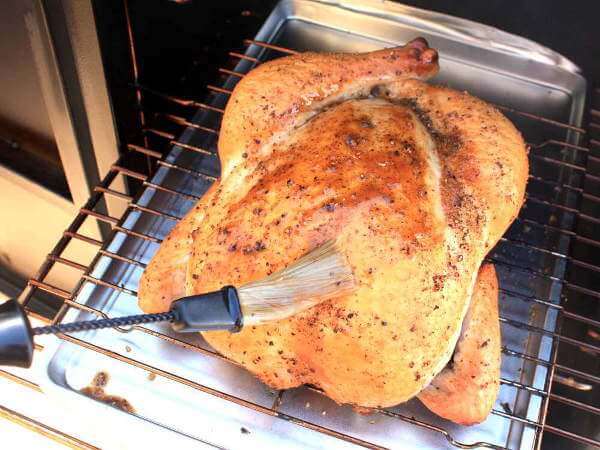 Now, if you're smoking some ribs, or a brisket, or a big, juicy pork butt, and you want to throw in a whole chicken because, well, it's not right to waste smoker space. Just do it.

Smoke that bird at 225 degrees until it reaches 160 degrees, then pop it into a hot (400 degrees) grill or oven for 5 to 10 minutes. Keep a close eye on it, and remove it when the skin has browned to your liking.

The skin won't brown as nicely as it would've using the hot smoking method, but it'll do in a pinch. 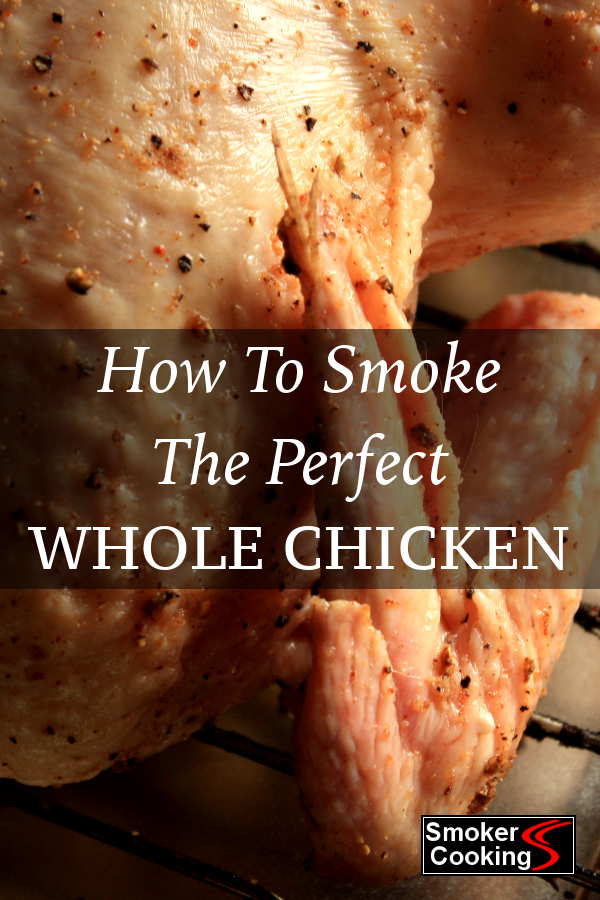